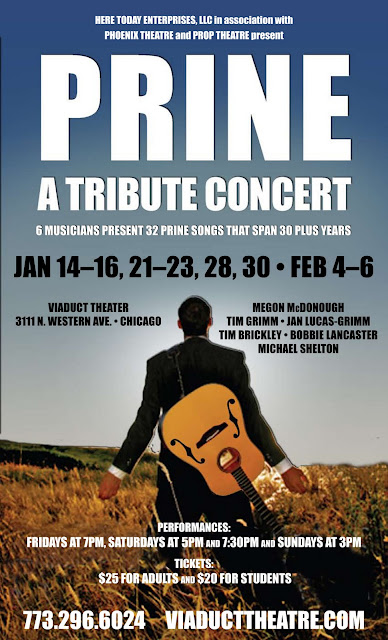 For those of you who gloriously followed our "Pure Prine" project, we have great news to share: the new touring-friendly. concert-only production "Prine: A Tribute Concert". Same tremendous line-up of 30-plus John Prine compositions, and same tremendous cast - with one notable exception: the very talented (and very pregnant) Jenni Gregory has been replaced by delightful Chicago-based singer-songwriter Megon McDonough. Lou Harry, in the Indianapolis Business Journal, just listed "Pure Prine" in his "Ten Best Of The Year" column, and here's what he says:

"The Phoenix Theatre not only staged, but created. “Pure Prine” transcended the usual jukebox musical to such an extent that it was brought back for a revisit just months later. It’s also likely to have an afterlife, with a concert version opening this month in Chicago. See what happens when great raw material, a first-rate cast, and an ideal set are managed by a talented director with a passion for the material? This one made it look easy, but anyone who knows theater knows it wasn’t. Kudos to all involved. Some of the “Pure Prine” crew were also involved in the infectious, surprisingly joyful “Hoosier Dylan” at the Athenaeum..."

The shows run Friday, Saturday (two shows) and Sunday, starting January 14th. (No show on Jan. 29). Hope you can make it! Who doesn't love Chicago in the winter, you babies!
Posted by Tim Brickley at 9:19 AM