The last number we were working on before today's "Zoomerville" rehearsal lunch break, was the funny, pretty little ballad titled "Teen Pristine Princesses". I then had to use the break to go set up at the Westin, because we're playing some cocktail jazz for the 500 Festival Princess gala unveiling this evening....
Posted by Tim Brickley at 3:26 PM No comments:

I was under the impression this was running next week, so sorry for the short notice. At 4PM today, an interview I recorded last week re: "The Zippers Of Zoomerville" musical, will be airing on WFYI-FM 90.1's "Art Of The Matter". Conducted by co-host Travis DiNicola, it was a pleasant little chat - and my first chance to get a short peak at the station's new headquarters. For our world-wide friends - and those who prefer - you can stream the broadcast at 4PM EST at www.wfyi.org. (And, I bet, you can proabably download a podcast of it if so inclined...)
Posted by Tim Brickley at 10:40 AM No comments:

Me and my hero. 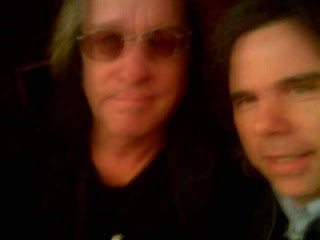 It's not every day you get to wrap your arm around one of your life's true inspirations. Well, this is a lousy cel phone photo of a pretty great moment for me. It's me and Todd Rundgren, taken last Wednesday at DePauw University, at his Ubben Lecture Series appearance, which was wonderfully moderated by true Todd-o-phile (and DePauw Director of Media Relations) Ken Owen. (If you are not familiar with the work and career of Rundgren, one of the greatest singer/songwriter/producers in rock history, see Ken's fabulous wrap-up of their talk, which you can find here: http://www.depauw.edu/news/index.asp?id=23334 .)

Anyway, briefly, I got Todd's landmark Something/Anything? album when I was 14 or 15, and it truly altered my life's course. By then, I was in love with the Beatles and Elton John, but this, my god, Todd produced the album, wrote all the songs, played all the instruments and sang all the multi-layered vocal parts (on three of the album's four sides), did all the arrangements, and even coordinated the artwork. One person can do all that?, I thought.

I had been playing around with various instruments at the time (guitar, the piano my mom and dad so graciously/amazingly bought for me and put in their bedroom because that was the only place it would fit, my brother Pat's drums) but this sealed the deal. I wanted to do this - especially after getting a look at the iconic photo that took up the inside of the gatefold sleeve: Todd, standing on a chair, his back to the camera in what I always thought was a Hollywood motel room. His arms are raised in a twin "V for Victory" sign, and what looks like golden dawn daylight is breaking in thru the shut blinds and under the door. The room is filled with the music /recording stuff - a baby grand, a then-exotic synthesiser, an 8-track reel to reel tape recorder, guitars, empty takeout containers, scraps of lyrics and sheet music everywhere. (Check out the photo at Todd's site: http://www.tr-i.com/)

Hey, that's what I want to do!, I thought. And, improbably, in my own way, I did. And I got to tell Todd that, which was pretty cool. Meet the Todd Rundgren of his zipcode, dude. (I also did get to ask him - during the talk - about his early manager, the infamous folk/rock godfather Albert Grossman, and whether he's consider letting me produce his next album - which got a laugh from the crowd becauses he's never, in 30 years, let anyone else produce him. I drift off to sleep now telling myself "Well, he didn't exactly say 'no'....")
Posted by Tim Brickley at 8:27 PM No comments:

We're in rehearsals now. And by that, I mean right now - it's Thursday night and Jack is blocking the first act with the cast, and I have a little time to catch my breath. I actually finished writing the music, recording a complete vocal version of it (w/ yours truly doing all the voices ala Freddie Mercury) and printed out the complete vocal score for the cast on Saturday, April 11. A happy day, indeed. I distributed materials, and after a few days of everyone getting a bit familiar with it, we had our first informal vocal rehearsal at the studio on that next Monday night, the 13th.

After all the time, toiling away on my own, it was a joy to hear it sung by others. And the best part was - I had gone out and made sure I had some good beer (current obsession: Red Seal Ale, from North Coast Brewing of Fort Bragg, CA. My brother Chuck, high-end beer procurer for the stars in Mill Valley, turned me on to it) and wine. When I offered them all a drink, they all looked so surprised, it cracked me up.

"Oh, yeah - you're all all professionals." I said. "Me - I've crafted a career where not only is drinking on the job is tolerated, it's often exhorted. Please feel free..." So we had a few drinks and a marvelous time for the next few hours.

That was then. No Red Seal flowing now here at rehearsals at the theatre. All business, folks. There's alot to get to in just a little over two and a half weeks. These multi-talented actor/singers are amazing. SO much to learn. The script - and the songs - are very syntax-dense, and the whole show is very fast-paced, with lots of character and costume changes - along with all the songs, of course. More later - back to the ol' piano.....
Posted by Tim Brickley at 7:24 PM 1 comment:

Where have I been?

Where have I been? It's a short answer - and a long story.

On February 25th of this year, my longtime friend and collaborator Bryan Fonseca asked me to attend a read-through of a new play he was producing at the Phoenix Theatre here in Indianapolis. I said sure, always interested in a chance to work w/ Bryan. Through all the dozens of projects we've worked on through the years, he has always inspired some of my best work.

Well, that's where I've been. I've been co-writing a musical, "The Zippers Of Zoomerville", which opens May 7th at the Phoenix.

"Zippers" is the brainchild of the awesomely-talented Jack O'Hara, who many will know from one or more of his many lives: writer, actor, director, (m)ad-man, leader of legendary '70's comedy troupe The Nebulous Players, late night movie host (whose replacement was a funny young weatherman named Letterman.) With it's genesis in various Nebulous skits poking gentle - but serious - fun at a particularly Hoosier May auto-obsession, "Zippers" is a fast-paced and very witty Gilbert & Sullivan-esque 'mockeretta'. Jack's written the book, the lyrics, has a really good basic musical idea for each number, so I'm co-composing the music with him.

It's a six person cast, with (at latest count) around 25 musical numbers, which includes a couple of reprises, and the whole final "The Race" suite, which may be split into numerous segments. It's going to be a fun show, and the cast is fabulous: the top-shelf Chuck Goad (the ever-present "Scrooge" at IRT, ), Phebe Taylor (I worked with her last year on "End Days", she is splendid), Angela Plank (ditto for "Love/Person" this January), Mikayla Reed, (who I don't know but sings like an angel), Scot Greenwell (who had the "bumpkin rookie driver wunderkind" character John Hoosier Lordyboy, Jr. nailed from the first read-thru), and multi-talented Michael Shelton, who I was very pleased to have interpret mine and David Rheins' song "That Time Of The Year" in the just-passed holiday show "On Thin Ice: A Very Phoenix Xmas 3."

I have finally reached a place with a little breathing room - all the pieces are now written, and I'm going back and detailing them, getting ready to print them all out, and record a full-length demo CD of the complete show so everyone can drive around and practice in their cars, or while cleaning house, etc. I'll keep you posted on what is going to be - I'm sure - a wild and wacky finish to the open...
Posted by Tim Brickley at 4:11 PM 1 comment: