But there is such a thing as a "Free Music" lunch...

Did you get that title? (It's so hard writing a clever headline.) So, I've got this cool new lunchtime gig, which is an incredibly odd and wonderful thing. My dear friend, noted restrateur and punk rock legend J.J. Pearson has a groovy little cafe in the Klipsch Audio headquarters (3502 Woodview Trace, Indianapolis, IN 46268, tucked in behind the Pyramids near SR 421 and I-465 in northeastern Indianapolis.)

Klipsch, who make some of the best speakers and high-end home theatre sound equipment around, is, understandably, a company full of music lovers. And J.J. asked me to come play a lunch a few eeks ago, and it went so well it's going to be a steady Wednesday lunch gig. Although "JJ's Cafe" is in the lobby of the Klipsch building, and it's mostly for Klipsch employees, it's open to the public as well. (It's a little tough to find, best be Mapquest-ing it.) Great food at a great price - and one holy-be-jesus giant Klipsch sound system in the corner! Music starts at noon, and continues until the last table leaves.....
Posted by Tim Brickley at 4:15 PM No comments:

Dr. Charles Thomas, the exceedingly pleasant owner of the Chateau Thomas Winery (where, not co-incidently, I will be performing tomorrow night for their lovely Valentine's dinner) has truly been discovered by Hollywood. Here's the press release - fabulous vindication for all of his years of hard work out here in the oneolgical hinterlands...

"PLAINFIELD, IN., FEBRUARY 11, 2009….Chateau Thomas Slender, the only sugar-free wine in the world, will be one of the items included in the celebrity Oscar Gift Baskets at the 81st Annual Academy Awards ceremonies this year.

A sugar free wine for the celebrities was sought out and Slender
( www.chateauthomas.com/slender ) was found online. After contacting and speaking with winemaker, Dr. Charles Thomas, owner of Chateau Thomas Winery in Plainfield, IN, he was invited to Los Angeles to participate in the two-day gift giving event held in a sound stage on the back lot at Universal Studios. Dr. Thomas will serve Slender White, Slender Blush and Slender Red at the events on Friday, February 20th and Saturday, February 21st and then provide a bottle of Slender of choice to each celebrity as they visit the booth.

In the past, “official” Oscar gift baskets have included prestigious and pricy gifts ranging from a $32,000 package at Caesar’s Palace in Las Vegas to a gift certificate from Morton’s steakhouse. Last year’s estimate of gifts totaled $100,000. Dr. Thomas acknowledges he feels honored to be invited to the 81st Annual Academy Awards, the biggest movie event of the year.
Slender is made from California vinifera grapes and has the flavor and normal
alcohol content of the other fine wines he produces. These wines have been pleasantly sweetened and contain the new natural sweetener, Erythritol, which has zero calories, a zero glycemic index, zero carbs, and has demonstrable antioxidant activity. 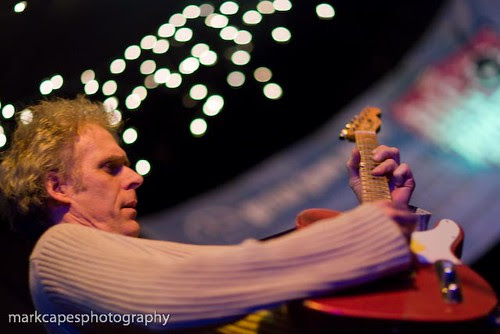 Day-Trader/Real Estate kingpin Mark Capes took this photo last Friday night, during our performance at the incredibly fun Gary Wasson surprise birthday party at Locals Only. I think it really captures the sonic/spiritual flight that is the soaring six-string experience of Larry DeMyer. I call him a "fearless guitar warrior", because that's exactly what he is. He approaches each song with an incredible energy, a sense of open experimentation, a total love and in-the-moment abandon that makes each gig - and solo - an adventure. You don't always know where you're going to end up, except that - no matter what - it's going to be a hell of an exciting ride.
Posted by Tim Brickley at 10:49 AM 2 comments:

"Cities be doin' it for themselves..."

I have been an alternative energy nut since I was a teenager. From an early age, I was convinced that wise and lovely Mother Earth could provide us with all the clean, renewable energy we would need - when we finally got smart enough to figure it out. It was a sad day for me when one of Ronald Reagan's first official acts as President was to tear down the experimental solar panels Jimmy Carter had installed on the roof of the White House.

So here's the fabulous local news item of the day: our metropolitan neighbor to the north, Kokomo, IN, has just opened the state's first city owned and operated biodiesel plant. Spearheaded by their new, progressive mayor Greg Goodnight, this isn't just any ol' biodeisel plant. Like Willie Nelson's "BioWillie" venture, this is cleaner-burning biodeisel that's made by chemically recyling used frying/cooking oil - at this point is donated by 12-area restaurants - into diesel fuel.

So instead of clogging up the city's sewers, old doughnut and french fry oil is being converted into a cleaner-burning fuel that will COMPLETLY RUN THE CITY'S DIESEL TRANSPORTATION FLEET! (You knew you could do that, right? You can damn near pour Crisco into a diesel engine and it will run. Albeit a bit less-than-perfectly, you have to refine it and add some anti-freeze component to get it to be really usable, which apparently is what this plant does.)

According to today's article by Scott Smith in the Kokomo Tribune (link to full story below), the city put up $60,000 to get the venture up and running and it's part of a larger city plan to greenly reinvigorate the local economy. Called "K-Fuel", the resulting product burns cleaner than regular diesel, is less stressful on engines, and can be produced for - get this - 80 cents a gallon, which will save them approx. $25K this year in transporation costs.

Rock on, Greg Goodnight and Kokomo! This is how we are going to create the new, green economy, people - by actually digging in and making it happen. Small-scale, local, brilliant. At some point, I want to go tour the facility, and I'll keep you posted. Wouldn't you much rather want to smell doughnuts coming out of a bus exhaust? (I know my brother's housemate Jay sure would...)

And get more info on Kokomo's Green Energy plan here:
http://www.fuelingkokomo.org/
Posted by Tim Brickley at 2:58 PM No comments:

Posted by Tim Brickley at 5:22 PM No comments:

Hey folks - welcome to Blogger! I thought as a little intro, I'd fill you in on what's been going on the last couple of months at Hit City.... Finished up projects for the three finalist bands from the 2008 "Teen Arts And Music Fest" event, three fabulous young rock and roll bands that the world will be hearing from: Elastic Waste Band, Razorback Llama and Knightfall......Rick Garrett (of the folk duo Patchwork) blew me away with his hammered dulcimer chops as we worked on an almost-done album of traditional tunes on that hauntingly gorgeous instrument.....John Barney - neighborhood pal, horseman, blacksmith, and all-around-gentleman - started work on an album w/ his band, the Passengers. (His Dylan-inspired body of songs, is, of course, right up my alley).... What else? I composed original music and created sound design for the Phoenix Theatre: December's "On Thin Ice: A Very Phoenix Xmas 3" featured mine and David's existential holiday torch song, "That Time Of The Year" as the big cast finale, and January's production of Aditi Brennan Kopi's Pulitzer-nominated "Love/Person"....Richard Sullivan continued rehearsing his new, kick-ass band, and did some demo work that's going to lead to a really great album later this year......Paul Lauck continues making progress on his sophomore effort, a lovely collection of new songs, and Scott Sanders has written a fabulous batch of new songs, and has started tracking w/ band The Reacharounds.....And on the horizon, Cara Jean Wahlers is coming in soon to record some of her lovely material (with Grover on cello and Martha on violin), and Stella and Jane (Bobby Clark and Suzette Weakley w/ guitar mastermind Jeff Foster) came into to work on the Bill Wilson tribute project I'm producing w/ house concert impressario Cyndi Wagner - who got her dear friend, Struggler frontman Jack Clark, to play some mean harp on "Pay Day Giveaway". More on this groovy project later.....
Posted by Tim Brickley at 2:19 PM No comments: