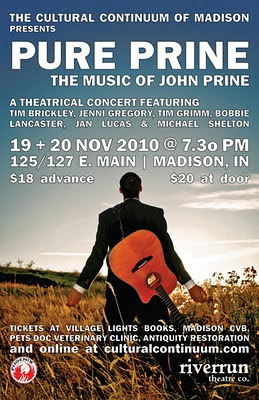 Our little musical, "Pure Prine: The Music Of John Prine" will hit the road for the first time later this month in a stripped-down, "theatrical concert" version debuting November 19th and 20th at the Riverrun Theatre in Madison, IN. Presented by the Cultural Continuum of Madison, and co-produced by both the Phoenix and Riverrun Theatres, the show will differ somewhat from the original Phoenix production of earlier this year - mostly in the lack of the elaborate bar set (we'll suggest the bar on a mostly-bare stage with some tables, a jukebox, etc.) Also, lovely and talented Jenni Gregory (waitress "Angel" in the show) must be pretty darn well showing her marvelous pregnancy by now, which is going to add in interesting dynamic to the various overlapping love triangles onstage.
As you may know, "Pure Prine" was conceived by Phoenix Artistic Director Bryan Fonseca, a near life-long Prine fanatic, and it tells the interwoven stories of six characters in a bar, playing and singing approximately 30 Prine classics, with no dialog - the songs tell the story. Besides myself and Jenni, the rest of the cast is: the marvelous talented couple of Tim Grimm and Jan Lucas-Grimm. Bloomington singer-songwriter Bobbie Lancaster, and Phoenix stalwart Michael Shelton.
Showtime is 7:30PM each night, and the Rivverun Theatre is at 125/127 E. Main in beautiful, downtown Madison. Click here or the title of this entry - to get your tickets now. In related news, a deal is in the works to bring "Pure Prine" for a run in Chicago early next year (it's coming right up, you know...) Stay tuned for details.
Posted by Tim Brickley at 4:55 PM